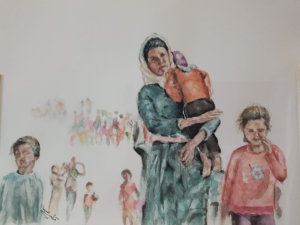 A remarkable and poignant story surrounds a first-time exhibitor at the 10 Parishes Festival this year.

Bathealton Village Hall will welcome Kotob Eddin Ali Daoud, an artist and musician from Kurdish Syria whose paintings show a journey from oppression and fear in his native country
to a happy re-settlement in Somerset.

Kotob was born in Qamishli, northern Syria in 1974. At the age of 17, during school studies, he was arrested for a political offence by the Syrian regime and imprisoned for three years during which he was tortured. He carries residual health problems including seizures and depression.

In 1994, Kotob joined a music institute in the Syrian capital Damascus and learned to play the Oud (similar to lute) and Buzuq as well as studying solfege (musical theory) for three years. He participated in festivals, national holidays and parties and worked as a music teacher in some music institutes.

In 2012, he moved to Iraqi Kurdistan (Erbil) because of the events taking place in Syria,
including murder and destruction.

It was there that he began to draw with a pencil, which was a way to express his sadness and anxiety and the tragedy of the people. Kotob made an art exhibition consisting of 25 portraits of the Kurdish martyr officers who eliminated terrorism and the terrorist organisation ISIS.

In November 2019 Kotob and his family, consisting of his wife Amina, daughter Falak and son Muhammad (now 8 and 11 years), came to the United Kingdom to start a new life away from injustice. They now live in Taunton and feel happy, stable and reassured.

Kotob plans to teach music and painting and is setting up a YouTube channel. Language limitations have caused him some loneliness and his creative talent is proving a good way to combat this. He has a brother also living in Taunton with other family members in Germany and another brother still in Syria.

The watercolour paintings that he will display narrate three clear stages in his life – a journey through his early life, the civil war and his new life in Somerset.

He will be present himself at Bathealton Village Hall on both weekends of the Festival (which runs from 11th-19th September), a particular attraction this Saturday 11th will be the chance to hear him
playing his instruments.

Qotob has been supported in his exhibition at 10 Parishes by Taunton Welcomes Refugee.

For more details visit the 10parishes festival website at  www.10parishesfestival.org.uk

We may request cookies to be set on your device. We use cookies to let us know when you visit our websites, how you interact with us, to enrich your user experience, and to customize your relationship with our website.

Click on the different category headings to find out more. You can also change some of your preferences. Note that blocking some types of cookies may impact your experience on our websites and the services we are able to offer.

These cookies are strictly necessary to provide you with services available through our website and to use some of its features.

Because these cookies are strictly necessary to deliver the website, refuseing them will have impact how our site functions. You always can block or delete cookies by changing your browser settings and force blocking all cookies on this website. But this will always prompt you to accept/refuse cookies when revisiting our site.

We fully respect if you want to refuse cookies but to avoid asking you again and again kindly allow us to store a cookie for that. You are free to opt out any time or opt in for other cookies to get a better experience. If you refuse cookies we will remove all set cookies in our domain.

We provide you with a list of stored cookies on your computer in our domain so you can check what we stored. Due to security reasons we are not able to show or modify cookies from other domains. You can check these in your browser security settings.

We also use different external services like Google Webfonts, Google Maps, and external Video providers. Since these providers may collect personal data like your IP address we allow you to block them here. Please be aware that this might heavily reduce the functionality and appearance of our site. Changes will take effect once you reload the page.