This reaches you a little later than anticipated due to so much happening in TWR – real things, not just planned things! 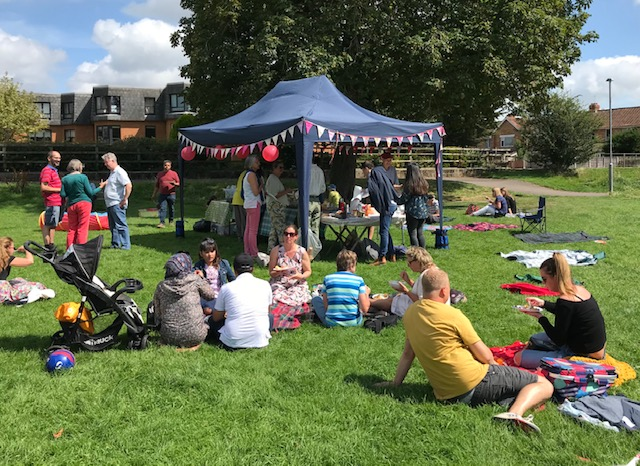 The first real thing to happen was a party in French Weir Park in early August where volunteers got together with several refugee families for an informal lunch.  The array of food was impressive as English picnic food met Syrian mezze!  The children played and adults chatted in the sunshine – it was wonderful to be together after so much time spent at home and online.

Then after a postponement from the July start, English Conversation & Coffee eventually began on Thursday 9th September 2021.  We have now had 7 weeks and numbers of Syrians from Taunton, Bridgwater and Wellington have been growing steadily.  In fact, if everyone decided to turn up on the same morning we could be 22 refugees and a similar number of volunteers.  In reality our numbers are averaging 16 per week and we have a group of 20 or so volunteers who come when they can.  It’s a very fluid arrangement of people who are fast becoming firm friends as we meet week on week.  The mornings have settled into a quiet hour of one-to-one conversation using various resources (maps, visual dictionaries, clock faces, reference books and drawing pads to illustrate the topic) which is then broken up as we have coffee and cakes and general chatter.  Following this we play simple word or number games together.  It is fun and there’s lots of laughter.  This autumn weather has been very helpful as we have spent most mornings in the lovely garden of the Quaker Meeting House.  Genuinely enjoyed by Syrians and by volunteers alike.

We are always looking to add to our numbers of volunteers, so if you are interested to join this friendly group and to help the refugees in a meaningful way, please contact Esther by emailing volunteering@tauntonwelcomesrefugees.co.uk.

Dare I mention Christmas?  TWR has commissioned Kotob, an artist and musician from Kurdish Syria and who now lives nearby, to paint two images which we have had printed into high quality Christmas Cards to sell to raise funds for TWR.  There is a Robin and a Stag.  Interestingly, Kotob wanted to produce images we are familiar with and he loves to paint creatures so it all fell into place very naturally.  The idea came from one of our volunteers who saw his work at the Ten Parishes Art Festival in September.  Both the exhibition and the cards have generated much excitement for Kotob and his family and he is receiving requests from people to paint pictures for them.  It is all very positive news.

We hope that you will support him too by ordering some cards!  They will be for sale at the beginning of November in packs of 5 for £10.  If you buy 5 packs you’ll get a 6th one for free.  It is an easy way to support TWR and the work we are doing, and by sending them to your friends you help us spread the word about this local charity.

We are aware that other charity cards are cheaper, but this project wholly local combining a refugee artist with a Taunton printer and is aimed at raising funds. 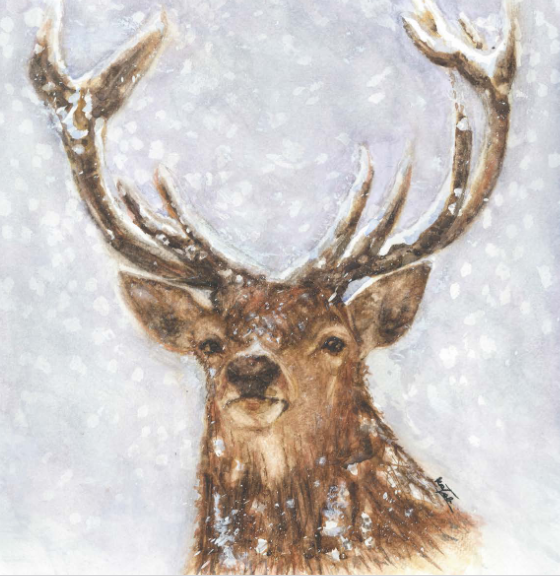 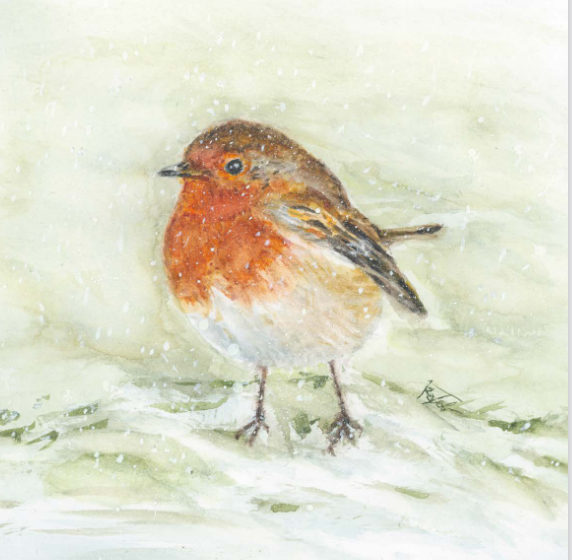 Please email Caroline, caroline@tauntonwelcomesrefugees.co.uk,  to place your order – how many packs of each image, together with your address – we will send you our bank details for a transfer and then post them out to you.  Or if you are in Taunton on a Thursday morning between 11-1pm you can come to the Quaker Meeting House to collect them in person, to save you the cost of postage.

Alongside all this good news however is the latest news on Afghan Resettlement.  When the emergency resettlement of Afghans who had been employed by the UK Government had to stop at the end of August, some 400 Afghans and their immediate families had been brought to the UK. The several hundred still believed to be entitled to come have been advised to make their own way to the borders. Meanwhile it seems that the replacement for the VPR scheme, under which Syrian families were resettled here, will now be used primarily for Afghan Citizens in need. 20,000 places will be offered over 5 years, as before – and it is believed that they will be given permanent leave to remain from the outset.

Meanwhile, Somerset County Council is preparing properties in various parts of the county, and TWR is ‘on alert’ for welcoming new families. The public response to the emergency that arose in Afghanistan, as played out on our TV screens during the second half of August, has been so impressive. TWR, and our sister organisation RAFT, have received many offers of help, for which we are very grateful. RAFT have informed us that due to such a massive response from the public, there are at least 6 warehouses fully stocked with basic necessities for the immediate needs of those Afghan families already in the UK, and are asking for us to hold back on donations of clothes or domestic items until we know about local needs. RAFT is still sorting clothing that has been donated but, for their on-going work with refugees and asylum seekers on the continental mainland, they are always in want of small and medium-sized clothing for men.

While we are still waiting to welcome new families, we have completed a second preparation course and have nine ‘befrienders-in-waiting’ who will be assigned to befriending circles as soon as possible. A third preparation course is planned for November, and we may still have a few new volunteers on a waiting list. We are very grateful to both those who have completed the course, and now are waiting to be ‘deployed’, plus those who have recently offered to help. Because we never know exactly who will be needed and where or when, we thank you for your patience. We will be in touch as soon as we are able with ‘definite news’. As an organisation, we try to offer befriending support across the Taunton, Wellington and Bridgwater areas. Currently we are finding it particularly difficult to recruit volunteers from the Sedgemoor district. If you are able to help, or know anyone who can, please contact us.

In the meantime, if you wish to be involved with other activities, such as fund raising, please contact Caroline, or with the English Conversation and Coffee then please contact Esther. Both email links are mentioned earlier in this newsletter and you only need to click on them to get in touch with us.

Trustee Advisors  – sometimes we are really privileged to have help and support from individuals who do not wish to take on the responsibilities of being a trustee, but have very relevant experiences and skills. So we are very glad to have David Moy (a previous chair) who continues to keep in touch with and advise us on the families who we no longer formally support. We also welcome Raawiyah Rifath who is studying for a PhD at Exeter University on Refugee and Asylum Law – and particularly on the effect of the current application procedures on mental health and well-being. Raawiyah is advising us on legal and cultural issues, and will become part of the enabling team on our preparation course. A very big thank you to you both for your invaluable inputs.

After the success of our first on-line seminar in May about the camps in Northern France, on July 21st Raawiyah Rifath spoke to us on Refugee and Asylum Law and the implications of the new Nationality and Borders Bill. On 20th October Lynne also gave a presentation entitled ‘Afghan Crisis: What next?’ in preparation for welcoming families from Afghanistan.  If you missed it, let us know and we can send you a link to a recording.

Spreading the Word about TWR is important and Simon, our current Chair, was recently interviewed on 10 Radio, whilst Lynne was asked to give a brief presentation to the Wellington Rotary Club, which turned out to be a very lively affair in the lovely setting of the Beambridge Inn.

We have also been sought out by The Chamber Orchestra of the West to bring fine music-making to the refugees in an informal and collaborative way.  This will be a private project, but there are events open to the public too.  Please visit www.chamberorchestraofthewest.co.uk for full details of their local concerts.

Miraculously the Donations keep coming in – thank you to all of you who support TWR.  We recently had a generous anonymous donation for which we are immensely grateful.

We also Fund-Raise within the charity

We are so very grateful to you all for your support – whether it be financial, advisory or with your time – it all adds up to something really useful.

We may request cookies to be set on your device. We use cookies to let us know when you visit our websites, how you interact with us, to enrich your user experience, and to customize your relationship with our website.

Click on the different category headings to find out more. You can also change some of your preferences. Note that blocking some types of cookies may impact your experience on our websites and the services we are able to offer.

These cookies are strictly necessary to provide you with services available through our website and to use some of its features.

Because these cookies are strictly necessary to deliver the website, refuseing them will have impact how our site functions. You always can block or delete cookies by changing your browser settings and force blocking all cookies on this website. But this will always prompt you to accept/refuse cookies when revisiting our site.

We fully respect if you want to refuse cookies but to avoid asking you again and again kindly allow us to store a cookie for that. You are free to opt out any time or opt in for other cookies to get a better experience. If you refuse cookies we will remove all set cookies in our domain.

We provide you with a list of stored cookies on your computer in our domain so you can check what we stored. Due to security reasons we are not able to show or modify cookies from other domains. You can check these in your browser security settings.

We also use different external services like Google Webfonts, Google Maps, and external Video providers. Since these providers may collect personal data like your IP address we allow you to block them here. Please be aware that this might heavily reduce the functionality and appearance of our site. Changes will take effect once you reload the page.